Freedom of expression is a fundamental part of our society. Americans invoke their right to free speech all the time, whether it’s an NBA player kneeling at a basketball game or a corporation donating to a political campaign.

When controversial speech happens online, who should decide what’s allowed and what crosses the line?

Policymakers aren’t the only ones wrestling with that question – the general public is, too. In late 2019 and early 2020, the Knight Foundation partnered with Gallup to survey more than 3,000 people about their views on social media, misinformation, and freedom of expression. Here’s a glimpse at what they said:

A majority of Americans say that people should be able to freely express their views on social media, even if those views are offensive: 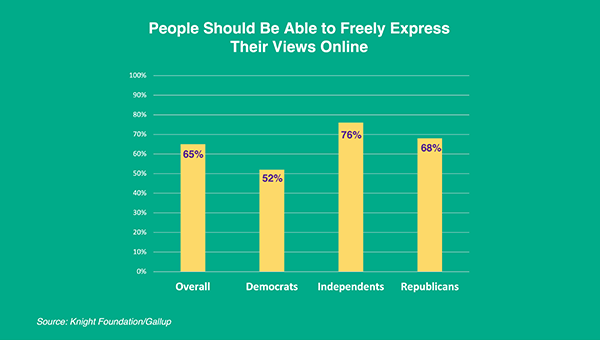 That said, a large majority of people agreed on a few things that should never be allowed online, including: 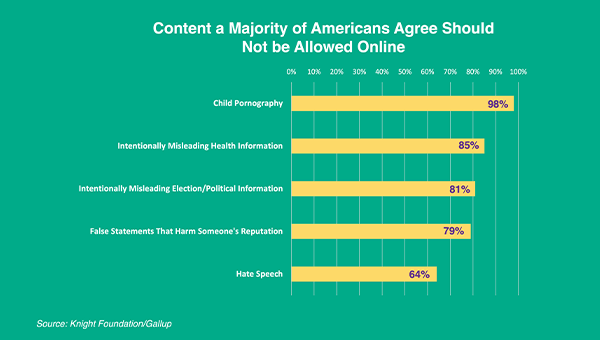 When those things do pop online, a majority of Americans believe that both the person or organization who made the post should be held legally liable, and the tech company hosting the harmful information should be, too:

Should we set some boundaries for online content, and if so, who should be in charge? The survey asked people which approach was better, “for the government to make policies that set limits or establish some guidance about what major internet companies can and cannot display on their websites and apps, or for major internet companies to make their own policies about what people can and cannot post on their websites and apps, without any government involvement?” Here’s the response: 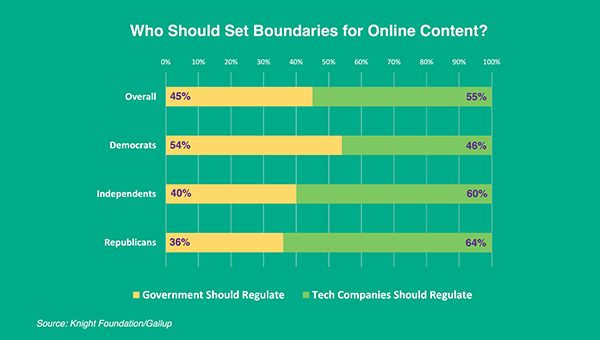 In thinking about the right balance between free expression and harmful content, some lawmakers in Congress want to reform a law that has a big impact on our online world. That law is the Communications Decency Act and Congress is interested in one piece of it in particular: Section 230. It’s a big provision with a little name. Test your knowledge and learn more about it here.

Democracy only works when we do – so let’s get started. Sign up to get tools, news, and invitations to special events that will help us all build a stronger future.